Some of your thoughts

Do you have a favorite topic?

Our journey flies by

Tammy Duckworth is the first expectant mother to give birth while simultaneously being a United States Senator  — I wish that would’ve been a headline from the 1980s.  (BTW, it’s her second child.) Patriarchy’s been absurdly over-rated and overwhelming assumed as “the norm” in this country. Sen. Duckworth being a mom and having a meaningful job is not a first for many women. 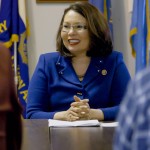 But there are few men–and who knows how many more women–like Tammy Duckworth.

On duty in Iraq in 2004, the former Black Hawk co-pilot took a hit from a rocket-propelled grenade and still managed to successfully land the helicopter, losing both legs and critically damaging her right arm. The fact that military hospitals were not equipped with female supplies gets buried in that story’s lead.

In 2006 she lost a race for IL’s 6th congressional district in the U.S. House, but we’re talking about a military service woman with mettle, not bone spurs. Tammy Duckworth ran successfully in 2012, winning IL’s 8th congressional seat.

Much of the media coverage then focused on her being the first female amputee elected to Congress, another awkward acknowledgment.

So, is the story the fact that she’s the first pregnant female senator or a wounded female combat veteran who earned a Purple Heart in Iraq? Or is it that she’s the first Asian-American to represent Illinois? It is incredulous that in the 21st century the bar for women is set so high that a female veteran and senator giving birth while in office runs the headlines for those who read other than Trump snooze.

This Thailand-born United States patriot knows how to face a mountain, like millions of other women. I zealously wanted my daughters to know that a powerful woman doing exceptional work is not hugely noteworthy. Now my daughters are fighting  the same for their kids, nieces and nephews. I can only hope my grandchildren will grow to innately understand what is right.

Men have been managing the narrative for too long. How much more than Tammy Duckworth’s remarkable career and the #MeToo Movement is needed to enlighten men? Evolution or revolution, it’s said.

Equality only has one definition.